What does SAF mean?

The term “SAF” is used in aviation to refer to Sustainable Aviation Fuels (SAF) with the understood notion that these are drop-in fuels that reduce greenhouse gas emissions, comply with the strict safety requirements for fuels to be used in aircraft and use feedstocks that meet recognized sustainability guidelines.

What is the difference between traditional jet fuel and SAF ?

Traditional jet fuel is made up of carbon and hydrogen molecules that are refined from fossil-carbon feedstocks (crude oil). When combusted, traditional jet fuel produces greenhouse gas emissions that add to the overall global concentration of CO2 in the atmosphere.

How is SAF produced? 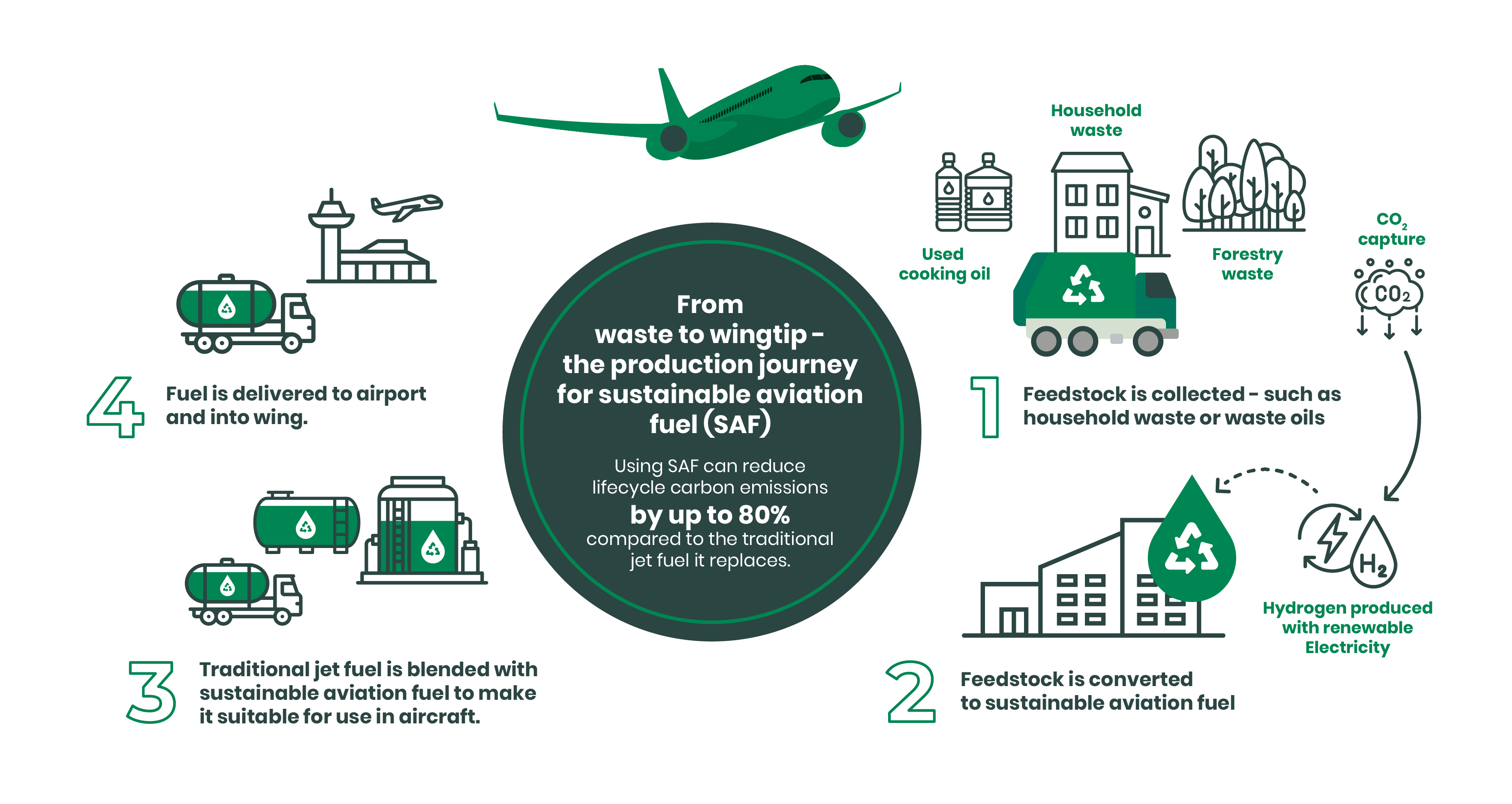 In the short-to-mid-term, low-carbon-intensity SAF is being made from wastes such as used cooking oils which significantly lowers the carbon footprint of the aviation sector while making use of the current supply chain and infrastructure.

Other feedstocks such as biomass residues (forest and agriculture) can be transformed into so-called biocrudes, that can be readily upgraded to low-carbon-intensity SAF. In addition, carbon can be also captured from the air or an industrial process and using renewable energy and low carbon-intensity hydrogen can be upgraded into SAF.

What are the benefits of SAF ?

Whereas traditional jet fuel adds to overall level of CO2 by emitting carbon previously locked away, SAF reduces life cycle CO2 emissions by up to 80% and is sustainable because it does not cause negative impacts on ecosystems and enhances the sustainability of the aviation industry.

Although aviation only contributes to less than 2% of the world carbon emissions (among the lowest of the transport sectors) it will likely be the hardest sector to decarbonise with green electricity/batteries, hydrogen, etc., not easily used until sometime in the future.

Why should Canada produce SAF ?

Canada is a global supplier of sustainable, lower-cost and low carbon-intensity feedstocks that can be readily transformed to sustainable aviation fuel.

Sustainable aviation fuels remain the largest and best contributor for aviation to decarbonize and meet climate goals, as it is a short-term deployable solution, requires minimal fleet investment for airlines and makes use of existing delivery and supply chains.

Are there SAF produced in Canada ?

There is currently very little SAF being manufactured in Canada. Only a handful of SAF refiners in the US, Europe and Singapore are producing or will be producing SAF in meaningful volumes.

However, Canada has the right ingredients to create an affordable and reliable SAF market through sustainable feedstock options, low-carbon energy sources and evolving climate-related policies such as clean fuel standards and carbon pricing.

Given the high expenditure cost of aviation fuel, federal and provincial governments must collaborate with the hard to decarbonize aviation sector to create solutions that accelerate SAF production in Canada and large-scale use to support aviation’s transition to a net-zero future.

By working with industry to establish sound policies that are stable over the long term, Canada can leverage its abundant sustainable feedstock opportunities and refining expertise to create a carbon efficient SAF market to deliver affordable SAF and put the aviation sector in Canada on a rapid pathway to decarbonize.

Formed by industry leaders, C-SAF envisions to become the voice of SAF in Canada through the development of value chain opportunities, the design and advocacy of sound public policies and programs, and the promotion of public awareness on the sustainability benefits in decarbonizing aviation.

C-SAF seeks to facilitate and accelerate the commercial deployment of SAF in Canada.

©2022 C-SAF All Rights Reserved. | Built by Kleurvision | Powered by KVGO

We use cookies on our website to give you the most relevant experience by remembering your preferences and repeat visits. By clicking “Accept”, you consent to the use of ALL the cookies.
Cookie settingsACCEPT
Manage consent

This website uses cookies to improve your experience while you navigate through the website. Out of these, the cookies that are categorized as necessary are stored on your browser as they are essential for the working of basic functionalities of the website. We also use third-party cookies that help us analyze and understand how you use this website. These cookies will be stored in your browser only with your consent. You also have the option to opt-out of these cookies. But opting out of some of these cookies may affect your browsing experience.
Necessary Always Enabled
Necessary cookies are absolutely essential for the website to function properly. These cookies ensure basic functionalities and security features of the website, anonymously.
Functional
Functional cookies help to perform certain functionalities like sharing the content of the website on social media platforms, collect feedbacks, and other third-party features.
Performance
Performance cookies are used to understand and analyze the key performance indexes of the website which helps in delivering a better user experience for the visitors.
Analytics
Analytical cookies are used to understand how visitors interact with the website. These cookies help provide information on metrics the number of visitors, bounce rate, traffic source, etc.
Advertisement
Advertisement cookies are used to provide visitors with relevant ads and marketing campaigns. These cookies track visitors across websites and collect information to provide customized ads.
Others
Other uncategorized cookies are those that are being analyzed and have not been classified into a category as yet.
SAVE & ACCEPT